The Latino and Latinx communities in LA are a big part of the population, as in the United States in general.

Born in El Salvador, the work of  Eddie Rodolfo Aparicio rotates entirely around those communities, both in terms of narration, and effective participation in the realization of the work.

“My work addresses immigration by default, but I am more interested in the possibilities of an expanded understanding of identity and place making. Our history is being erased and I feel an urgency to reclaim the narrative of the Latinx identity in the US and abroad” – he affirms in his artist statement.

I met Eddie at his studio in Los Angeles on a warm day during an intense Frieze Los Angeles week. I really wanted to connect with him in person, and see what was working on at the moment.

Having the artist walking you through his art-making process  and visiting the studio as a space of creation,  is always eye-opening in learning more about an artist’practice.

When I arrived at the provided address, his studio revealed to be inside an expanse garage-like space, opened in the front.

Lying on the floor as well as suspended and hanging from the ceiling, some of his big rubber-made compositions/panels transferred from trees skins.

He tells me that he had just recently relocated his studio: up until recently and for the entire course of the pandemic he was more downtown, the space was big but too far – having spent my first 2 days trying to drive in LA I know now myself how the traffic is terrible there and how to get from Hollywood to downtown can really take almost an hour drive.

Now he’s closer to his house, and the space  is enormous, perfect to host a large-scale installation he wanted to work on for a while.

For now in the space there is an intriguing series of high columns standing and taking shape, as he just started to cover them by the same rubber-made skin of most of his works.

He tells me that he doesn’t know yet where they will be presented – but this is actually better as in this way he’s not influenced by the space.

Eddie graduated in painting at Yale:  despite painting being now just a minimal element in his work,  sometimes he returns to it just to enrich these surfaces, and overall his works reveal a great sense of composition in the attention of patterns and textures that the material can offer.

Even during his MFA he actually spent very little time producing in New Haven, often returning to his LA studio to work as the space in New Heaven was not enough, and, most importantly, he was missing his key elements: specific trees, rubber and Latino communities to work with.

The material, Eddie explains, is a key element of his work as it incorporates already in both its historical background and its material presence all the narratives he’s interested in: rubber was first discovered by indigenous communities in central America and later appropriated by the colonials, and then  made its way into contemporary global society. Rubber is today a big part of Western civilization and an essential element of the resulting material world that this has created, but none of these objects and innovations could have been made without the Indigenous knowledge that actually used the material in very different ways, much where way more sustainable than what has been used for later.

The rubber that Eddie uses incorporates in this way all a series of  de-colonial concerns, as well as the ecological ones which become more clear when he explains how he treat those rubbers to get these densely textured skins: the rubber works of his “Caucho” series are in fact  made from the sap of non-native tree around Los Angeles, casting their trunks as a way of capturing the surface of another non-native species in a community of non-native people.

Eddie, tells me that he’s interested in the stories these trees bring with them as elements that share the same “transplanted/delocated” feeling while the people of these communities are growing up around them. As many narrations he has captured reveal, sometimes these trees become important elements of reference in the neighborhood along people life for what happened around them, or what they represent in their memories.

He usually chose the trees to work on directly talking with the people of these neighborhoods, who most often indicate to him the ones he should eternalize in his “rubber skins” with their stories.  “I’m retracing material histories through the use of these materials in the contemporary communities that live here and that are disparaged”

Since those trees are most often cut after a while, Eddie’s artistic intervention also serves as an act of resistance,  to preserve this kind of new totemic presence from a mostly self-serving intervention driven by capitalist only logics.

This idea perfectly resonates also in his statement, as  he affirms “There is no neutral position within an ecological understanding of the world where environmental justice is inextricably linked to social justice and all materials in art making (especially our bodies) are part of that conversation”

I asked Eddie whether he has ever been caught while making this process in the public space, and what is people’s reaction in general.

He tells me that he always tries to go undercover, wearing street employees’ clothes to pretend he’s working for the municipality on the tree’s preservation (his work is indeed involving their preservation, in some way).

Smiling, he recalls the only time he was stopped by the police: he was with his father, and they wanted to arrest them. His father, he tells me, went through the civil war, escaped  and had been living in the US for years after that and never experienced it. Eventually they were released with no charge, but only  mind-numbing interrogation. He’s father is indeed a big supporter of his practice, as well as his family. They have always been an artistic family, starting with his granny who worked a lot with textiles and fabrics and made fabric sculptures and doodles with used clothes. Some of these memories still influence his practice a lot: all his rubber pieces are glued on specific fabrics on one side, and often incorporate other textiles or clothes. 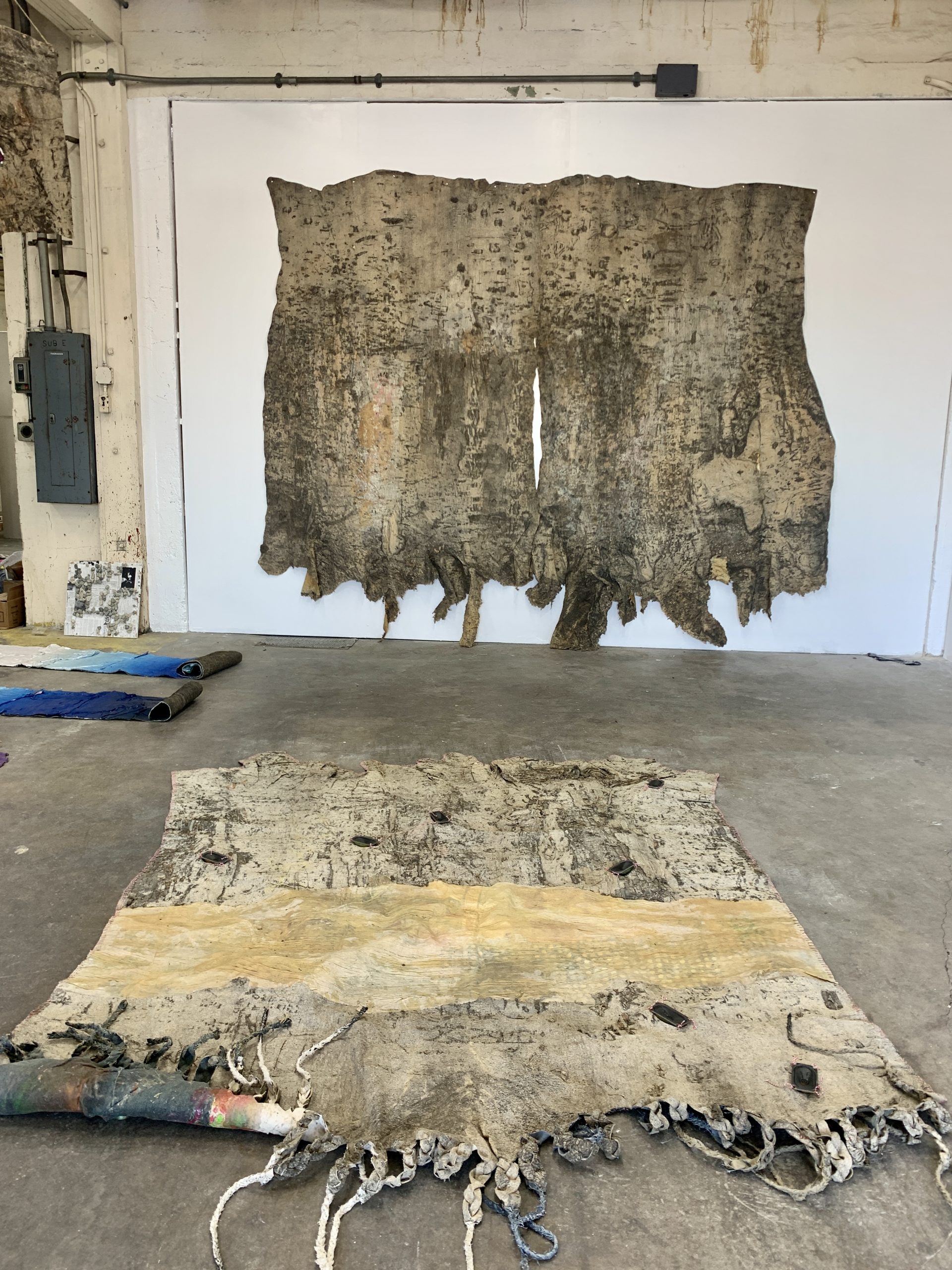 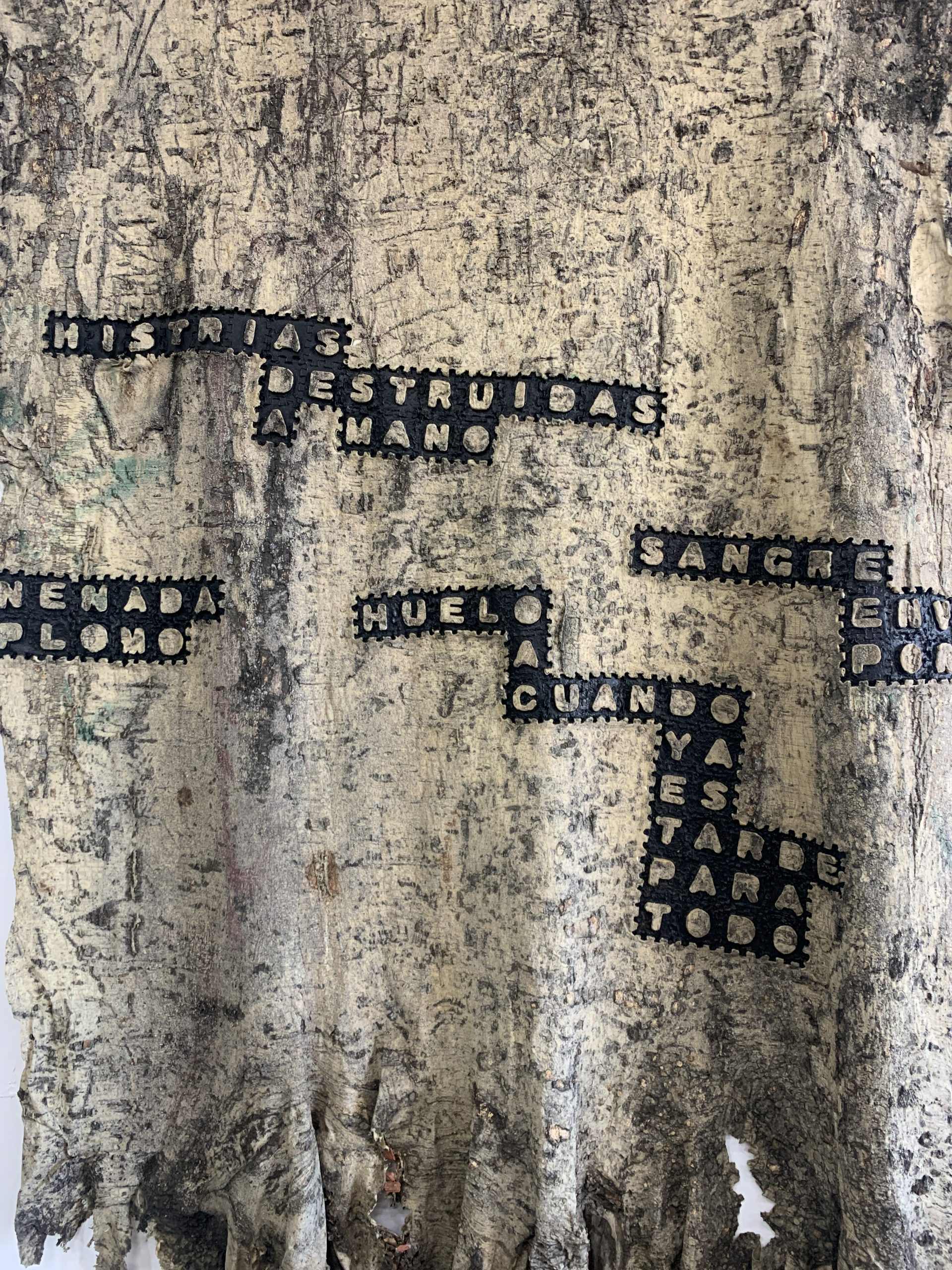 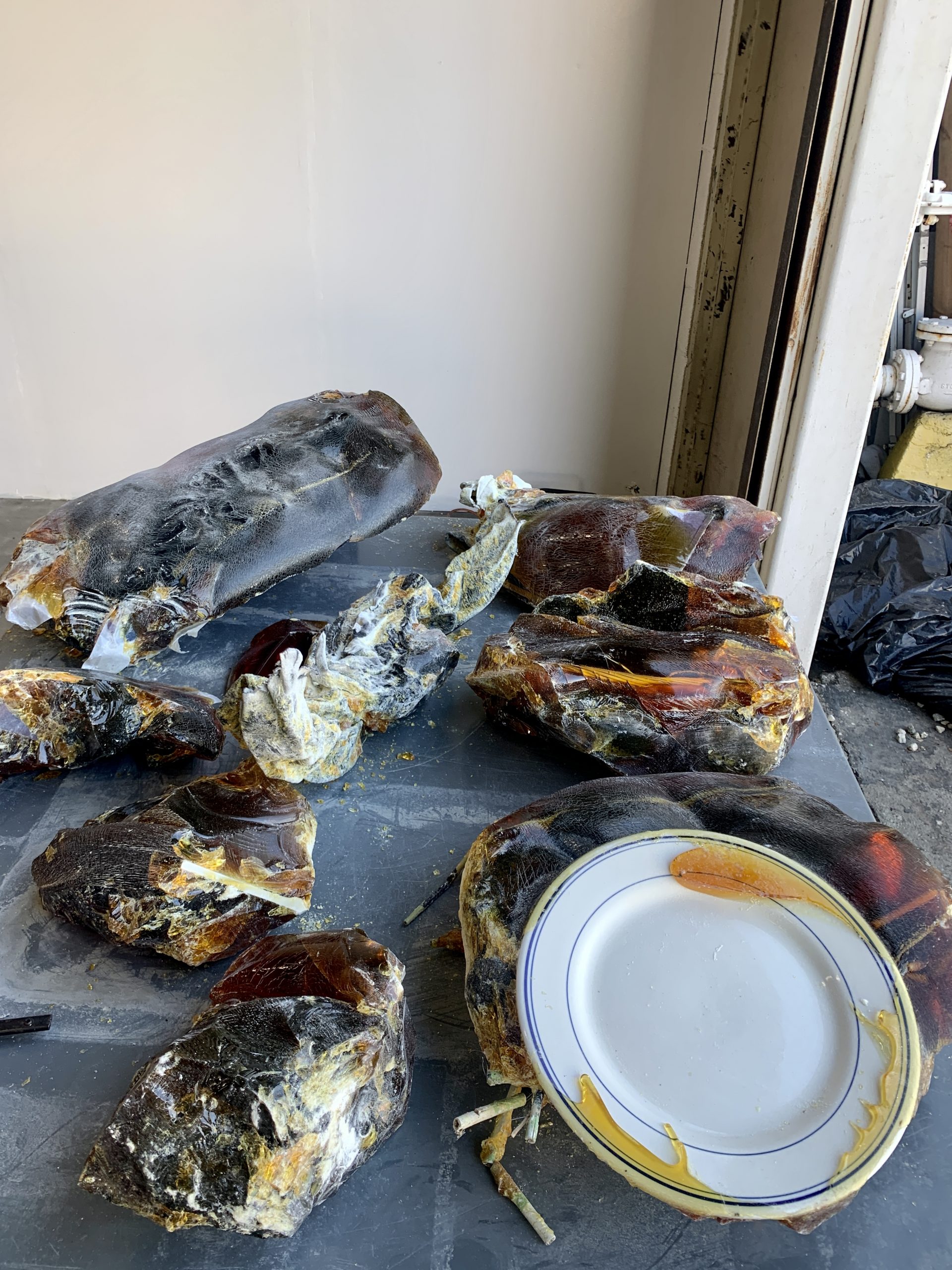 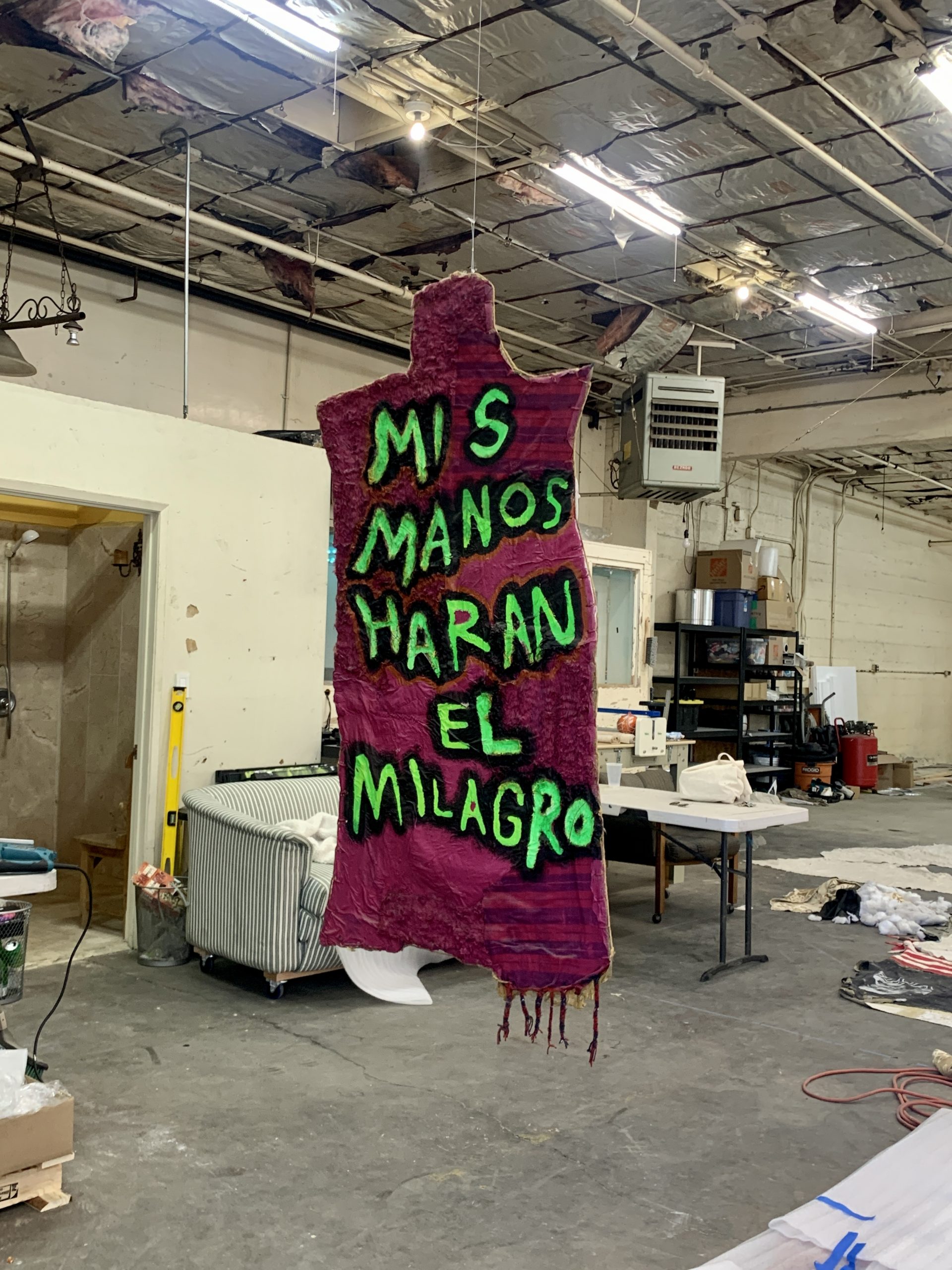 Text is another recurring element in Eddie surfaces: some of the ones hanging were incorporating verses of Central America poets, aiming to further give a voice to these communities and narrations that have long been overlooked but that can be turn extremely helpful in terms of understanding the contemporary immigration crisis and the general narrative around Central Americans in the US as well as our own immigration stories.

On this line, then Eddie also showed me another series that really resonated with this idea of collecting and preserving these minor stories, but also showed the fragility and rapidly forgotten of these narrations: a set of amber fragments incorporates daily life objects as plates, glasses but also shirts he has been sourced directly from those communities.

He tells me that he made use of the pre-fossilized amber, studying with his assistant the process, and then incorporating these found objects as kind of loving archives.

However, because of the high sensitivity of the amber to temperature and humidity conditions, the material is very unstable, so he’s now thinking of encapsulating these fragments in glass. He already found a workshop in Mexico which could take care of this, connecting the work with another community in Central America and extending in this way the narratives to new territories.

These elements were in fact part of a larger sculpture, Sepultura de Semillas/Sepulchre of Seeds (2021) a two-ton single block of amber he was showing for solo at the Hammer museum, No Humans Involved.

The cube-shaped sculpture slowly fell apart for the dilatation of the material and a series of power dynamics that ended to compromise any illusory pretense of perfection of the Western modernist-inspired cube as an ahistorical and even apolitical form, and rather revealed the restlessness of the material, and the stories encapsulated in it. In this sense, the natural process of formal dissolution inevitably assumes some metaphorical implications, alluding to the inner tumail beyond the seemingly perfection of the city, and at large, in the national social system.

Eddie is also fresh of the El Barrios Triennial in New York, and in 2019 he had a solo at Mistake Room, an independent space that under the guide of César García-Alvare has rapidly established itself as a taste-making platform supporting for Latinx art, and the Latinos community in general in in Los Angeles

We chat more casually while I was waiting my Uber (16 min far the closest due to LA traffic) and he tells me how he will try to avoid the craze of events and parties going on this week: he has too much to do at the studio, with big institutional shows are coming next for him, but he cannot really reveal much apart, the first being  one of the biggest institutions in Los Angeles.

Also, drawing from this experience with amber and encasing domestic but evocative objects sourced from around Salvadoran  communities in Los Angeles,  he will expand this practice in the occasion of a big commission she has received for a major mural in the LA Subway: he really wants something that is able to speak to people, to the specific community in that area of Los Angeles, that has rarely access to art also because it has long excluded the narrations that resonates with them. His public works will incorporate in the mosaics the stories of these Central American communities in the US, and elements that talk about the immigration experience, so that the work will really resonate with them emphatically, before any formal or aesthetic reading.

Leaving his studio I realize how all his work is indeed another example of how there’s no material which is inert and neutral, but all bring a story within that extend their physical presence to inescapable and often intricate political and cultural implications embedded in their genesis, production or exchange process.

In this sense Eddie’s work with these large scale rubber casts are so topical today, in the way they offer both material and metaphorical evidence of the past and ongoing  social and economic relationships between Latin America and the United States, and the issues of inequality and integration that await to be fully addressed by the country. 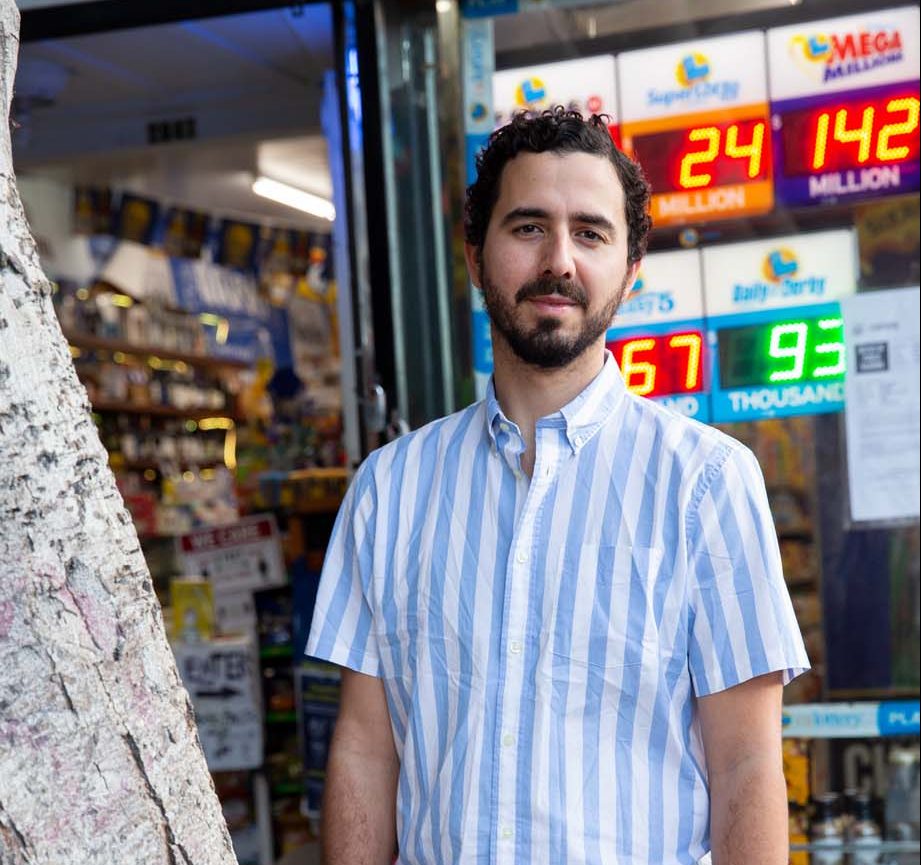