Getting to Hiejin Yoo studio feels like a sun-bath, as when looking at her bright and colorful works.

When I arrived, the warm light of Los Angeles inundated both outside and inside this industrial space turned into a multiple studio venue shared by different artists.

Stragenly, but comfortingly, this immediately lowered all the tension caused by my first time getting a car in the US,  and the first 15 min driving in Los Angeles.

I had just landed from Mexico City in LA and her studio is very close to the airport so I felt it was the best start for a few busy days of studio visits before the fair.

As a warm reassuring embrace, the work of Hiejin Yoo naturally conveys and instills this comforting sense of relief and emotional recharge, which really resonates with her own personality characterized by a sunny attitude and gentle kindness.

That has always been the sensation for me, standing in front of her works, but as soon as I’ve encountered her in person, I could feel that Hiejin also has an extremely positive aura.

And through her works her highly empathic spirit functions as a resonance and amplify chamber for a series of moments that nature and little things around us can offer everyday, if we are receptive.

Hiejin was born in Germany, then raised in South Korea and eventually moved to Los Angeles, to study and then live and work in the US. Her rich cross-cultural background has definitely enriched her visual language, as it freely taps into different cultural sources but especially draws from the different atmosphere and feeling of the seasons she experienced  specific time and places, and that reamerge in her works.

When we met, she didn’t have much in the studio to show: she just had a solo show at Half Gallery in New York so most of her recent works went there.

The show was extremely successful and soon sold out.

However, despite she’s one of these high-in-demand artists, she keeps this surprisingly genuine simplicity, of who still lives her art as a passion and need first, and as the perfect tool to elaborate and translate her experience of the world.

Standing out in the central wall of the studio there was intriguing bright and predominantly yellow-tones painting with two hands holding and squeezing this lock of just washed hair, or clothes after the laundry.

She explains to me that this gesture reminds her when she was helping her mother or granny to hang the laundry, but also when, not feeling good, she had needed the help of her husband  to wash her hair, as he’s likewise now needing after breaking up an arm.

“This kind of simple and universal gesture connects us with people we love, and take care of, in a collaborative dimension of sharing love, affection and care and where we know that we can rely in each others”

Hiejin paintings are often centered around these minor gestures evoked through simplified silhouettes and bold marks and that she allegorically stages in plane bright colors landscapes. These figures, mostly hands and or simplified silhouettes,  are often piecerced by this allegorical surrounding, so that inner life and feelings can merge and diffuse in the nature outside.

She confesses to me that her husband has long been a major source of inspiration for her works. In fact, she started to elaborate and formalize this very iconic style featuring these ghostlike lines of limb after moving to Chicago for her MFA , and being advised to focus on this strong feeling of loneliness she was proving being far from at the time her boyfriend. So she started to memorically recall moments, and poetically translate and re evoke them to canvas.

Most of her previous works were much about these moments and love gestures, characterized by a  poetic but extremely honest sentimentalism.

“ I wanted to express the person who you love is not next to you right now but remembering and missing how he touched me or our gestures to each other”, she explains to me.

In this sense, I see her works having a lot in common with poetry, and haiku in particular: all the elements function more as cryptic and minimal verses, short epiphanies, that illuminate and activate all a series of suggestions and impressions just by projecting them in the blank space between the lines.

I could get this better after she confessed to me that another great suggestion she received during her MFA was that she didn’t have to switch, as in a radio, between figurative and abstraction necessarily. But there could be a space in-between to explore, full of possibilities.

As she explains to me and I could get by getting more into her art-making process, her approach to painting is indeed very mental: she has an idea, an impression, but then takes her time to elaborate it in her interiority and in her memories. When she goes to the canvas she already has an idea of how the image will look like, as a direct translation of this mental image that has been originated through dreams, memories  and then allegorically  transfigured in a purely surrealistic dimension, and even spiritual dimension.

“intimate journals and meditations on self-discovery” – that’s how Hiejin often describes her canvases. 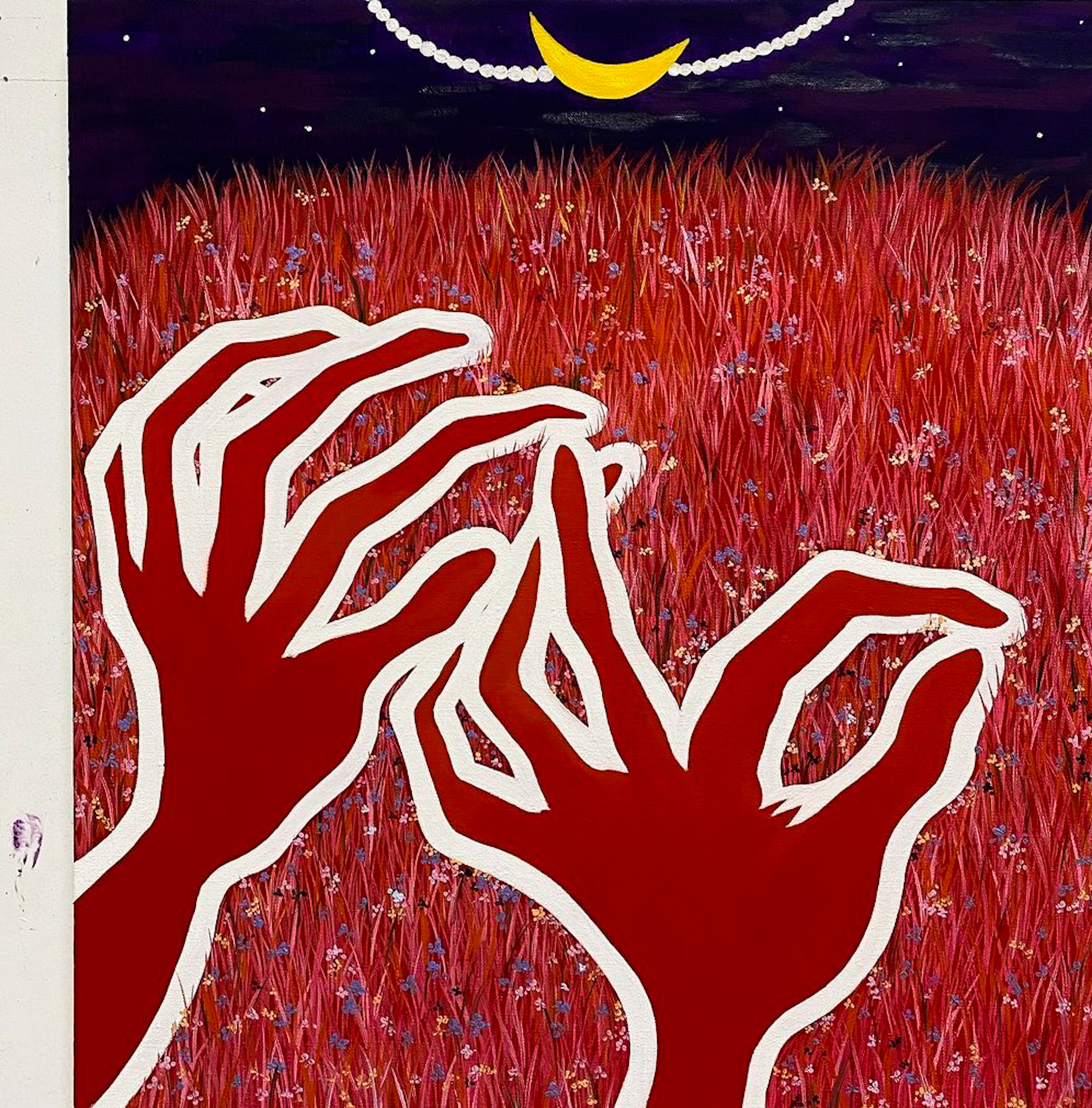 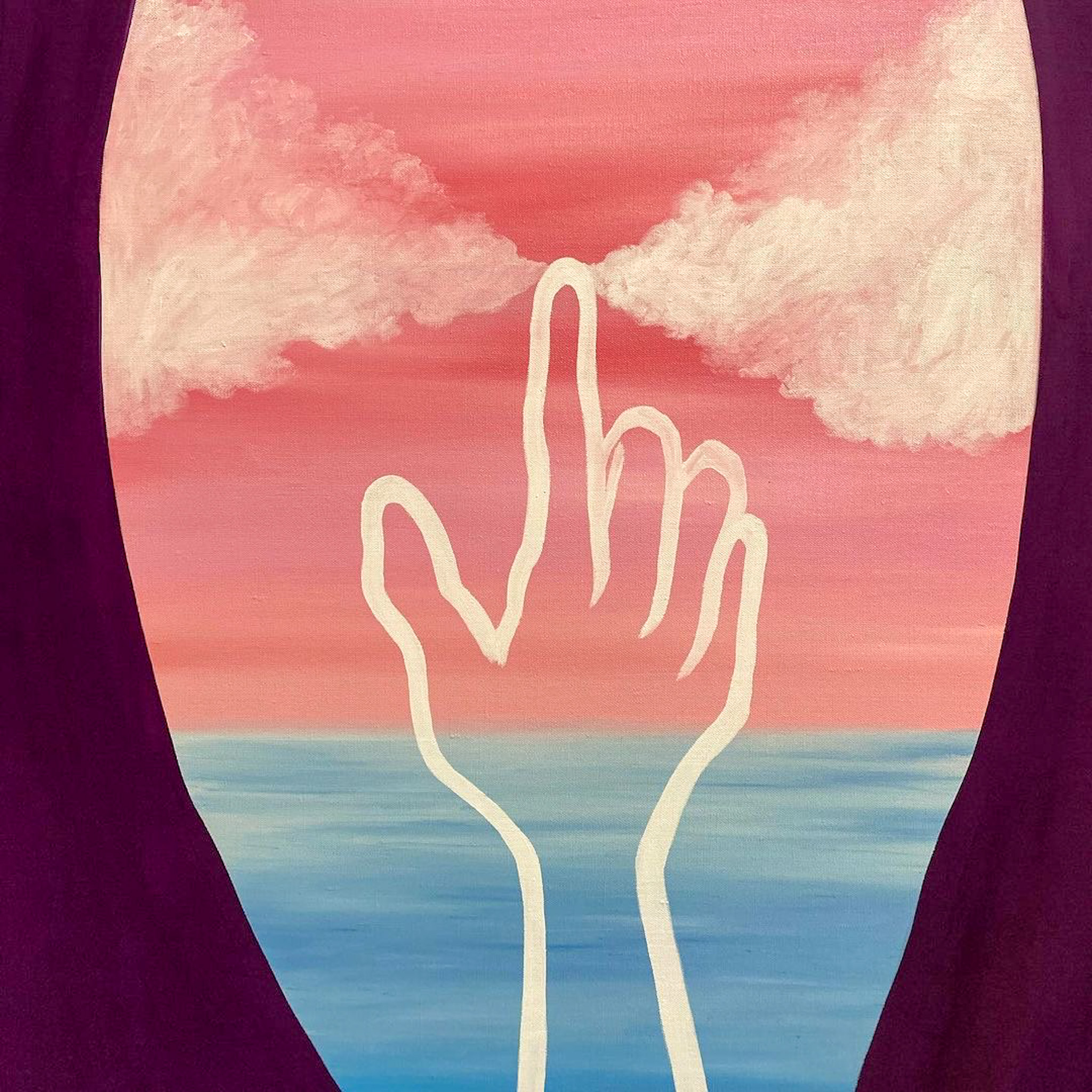 I then divert my attention to another work: a cartoon-like profile of a hand stretching out a finger as in feeling the air, facing a pinkish crepuscular sky. She tells me that she still works on this one, but the idea for iit originated as when she was in nyc for the show suddenly was warm, and sunny, so somebody told her that she was bringing the Californian weather with her. As this happened at a different time in her life, she was attracted by this idea that we can somehow influence the weather, with our mood and attitude, at least in common belief. So she wanted to try to translate this extremely poetic concept into canvas.

She reveals to me that most recently, and especially after the pandemic, she really started to focus more her work into the sensation that the surrounding nature. Moving to a more green area, taking out her dog, really helped her to focus and appreciate more the incredible colors already available in nature, and that in Los Angeles in particular are extremely vibrant and brighful as in her works. This is allowing her works to become much more universal, despite starting from very personal and mostly autobiographical experiences of encounters with the world.

Just confirming the universality of the feelings these works convey, she tells me that during the first days of the show in New York a family stepped in spontaneously and she started talking with them. The gallery has in fact full windows, so people can get curious to see the show just by walking outside in the street. They confessed to her that they had just been to a funeral, but looking at her works it had been such an uplifting and comforting experience for their spirit, that made them feel a little better.

That the universality of certain energies that art can activate, or instill, even just through simple color planes and forms, when those are imbued by sentiments. This was something that all the abstraction has explored, but I would rather describe her work as expressive synthetism – freely approaching figuration to mold colors  and forms in a universally readable way that resonates with the inner world, at first.

She tells me that it’s just the beginning of the week, but she will try to work hard to have something more in the studio to show since she’s expecting alla series of visits in these days. She tried to slow down a little bit after the demanding period working for the solo in nyc, but she has also a big busy year ahead as she has scheduled to participate in group shows in Brussels and Milan in April, and she will have another solo show at Koenig Gallery London in September.

In the following days I will see her at different events, and she will always greet me with a warm genuine smile which you find in very few people today.

And I came to realize that this is the exact same comforting sensation of positive energies that also all of her work convey.

Hiejin Yoo is originally from South Korea, but was born in Münster, Germany and then moved first back to the country and then to the United States for her studies. She graduated from UCLA’s MFA program in 2018 after receiving her BFA from The School of The Art Institute of Chicago.
She has participated in group exhibition at Blum & Poe, Almine Rech, Konig Gallery & Spurs Gallery in Beijing and had recently a solo show at Half Gallery, New York, NY, following a solo presentation at the gallery in Marfa. Recently one of her works was also on view at at The High Museum of Art in Atlanta, made possible by the generous donation of Alex Katz.
She will have soon a solo exhibition at König Galerie, London, United Kingdom later this year.
Hiejin Yoo currently lives and works in Los Angeles. 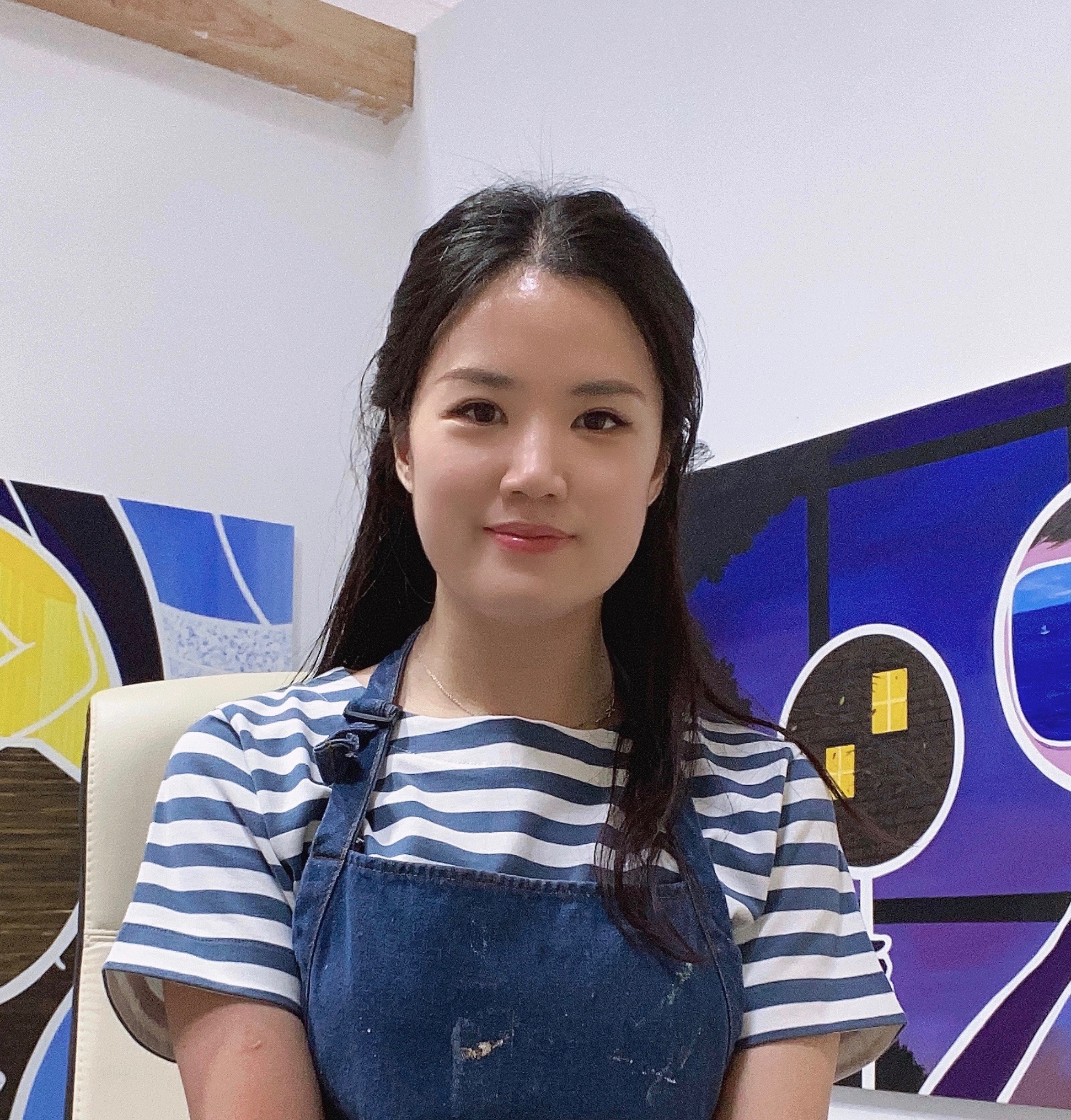 Hiejin Yoo is originally from South Korea, but was born in Münster, Germany and then moved first back to the country and then to the United States for her studies. She graduated from UCLA’s MFA program in 2018 after receiving her BFA from The School of The Art Institute of Chicago.
She has participated in group exhibition at Blum & Poe, Almine Rech, Konig Gallery & Spurs Gallery in Beijing and had recently a solo show at Half Gallery, New York, NY, following a solo presentation at the gallery in Marfa. Recently one of her works was also on view at at The High Museum of Art in Atlanta, made possible by the generous donation of Alex Katz.
She will have soon a solo exhibition at König Galerie, London, United Kingdom later this year.
Hiejin Yoo currently lives and works in Los Angeles.