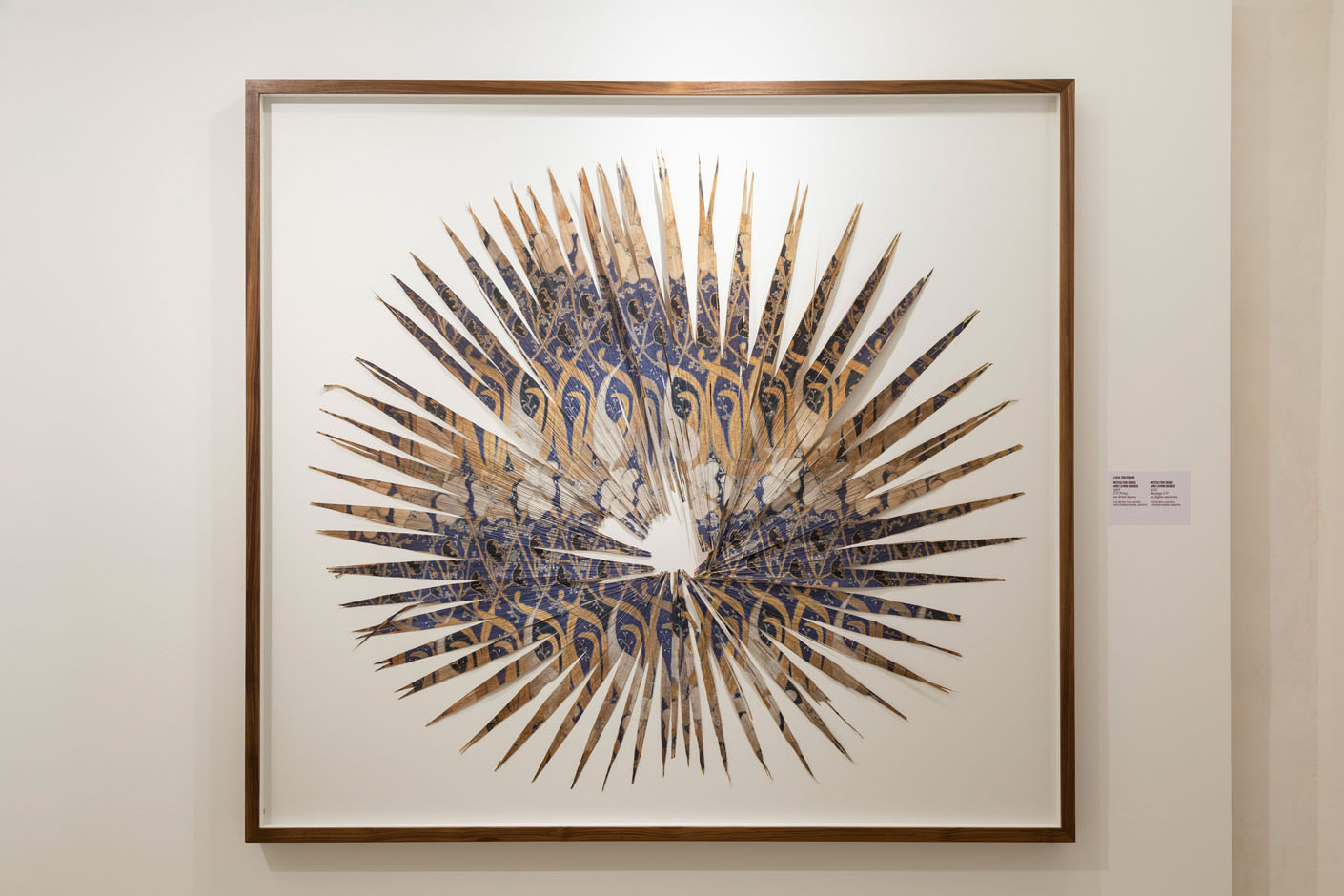 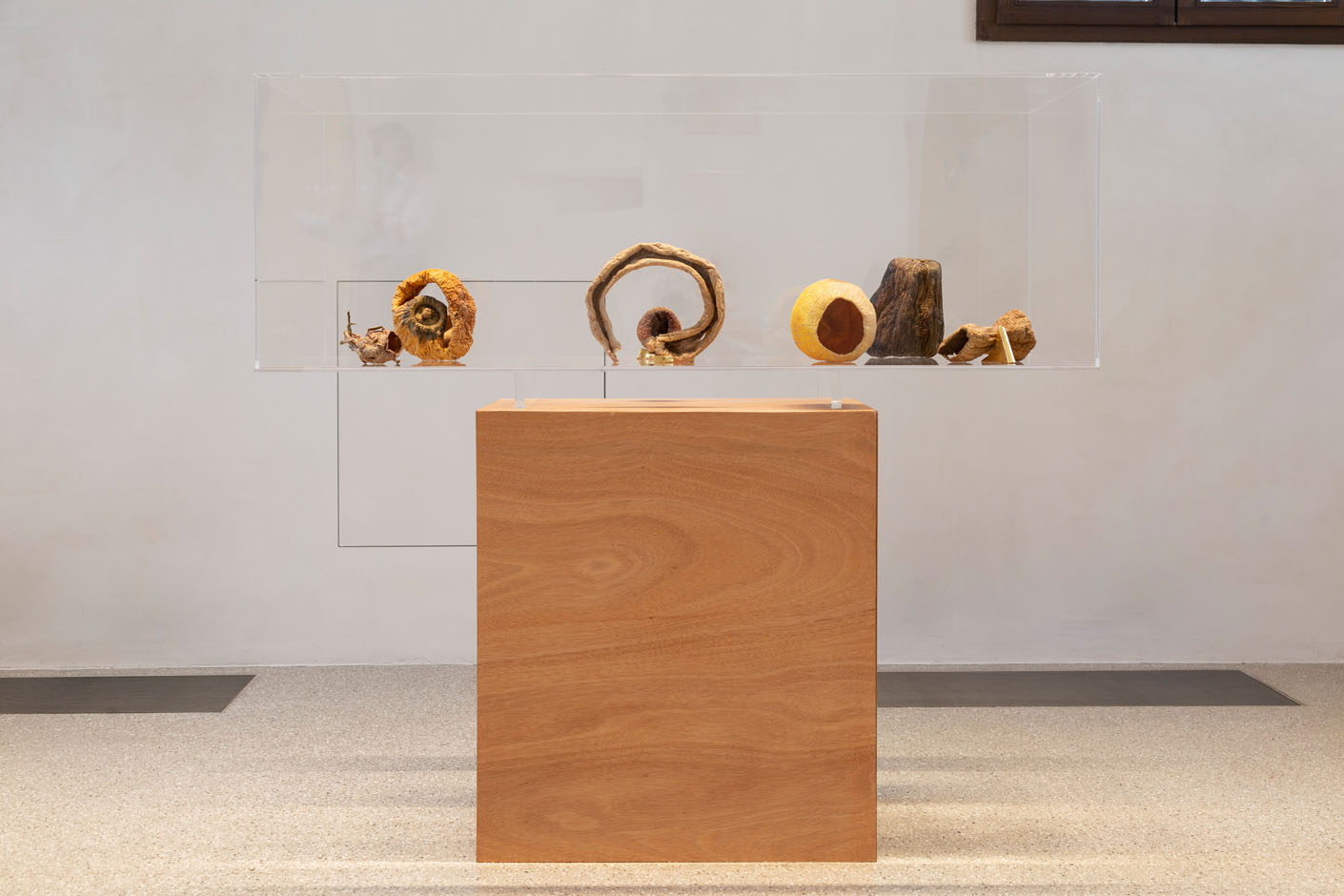 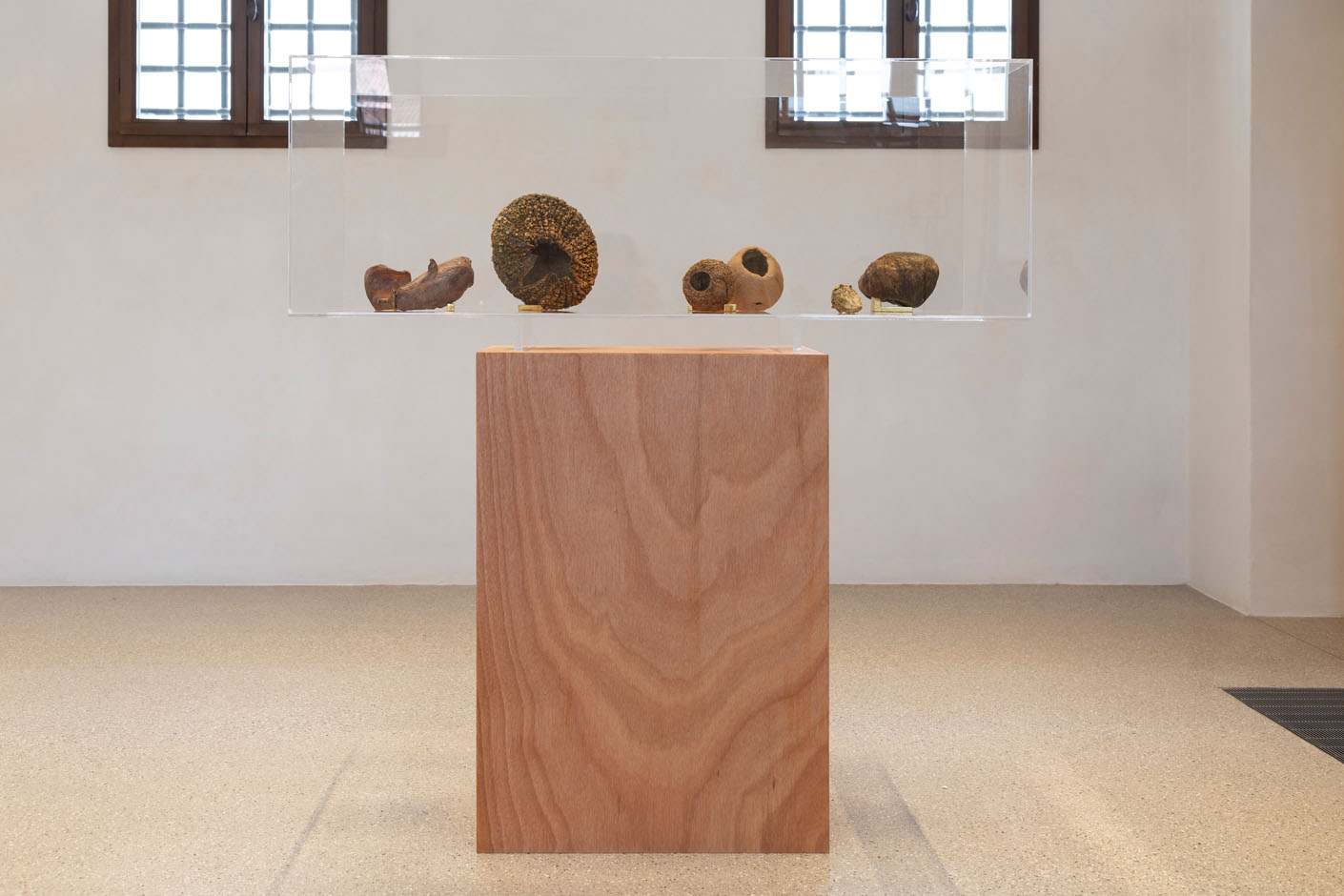 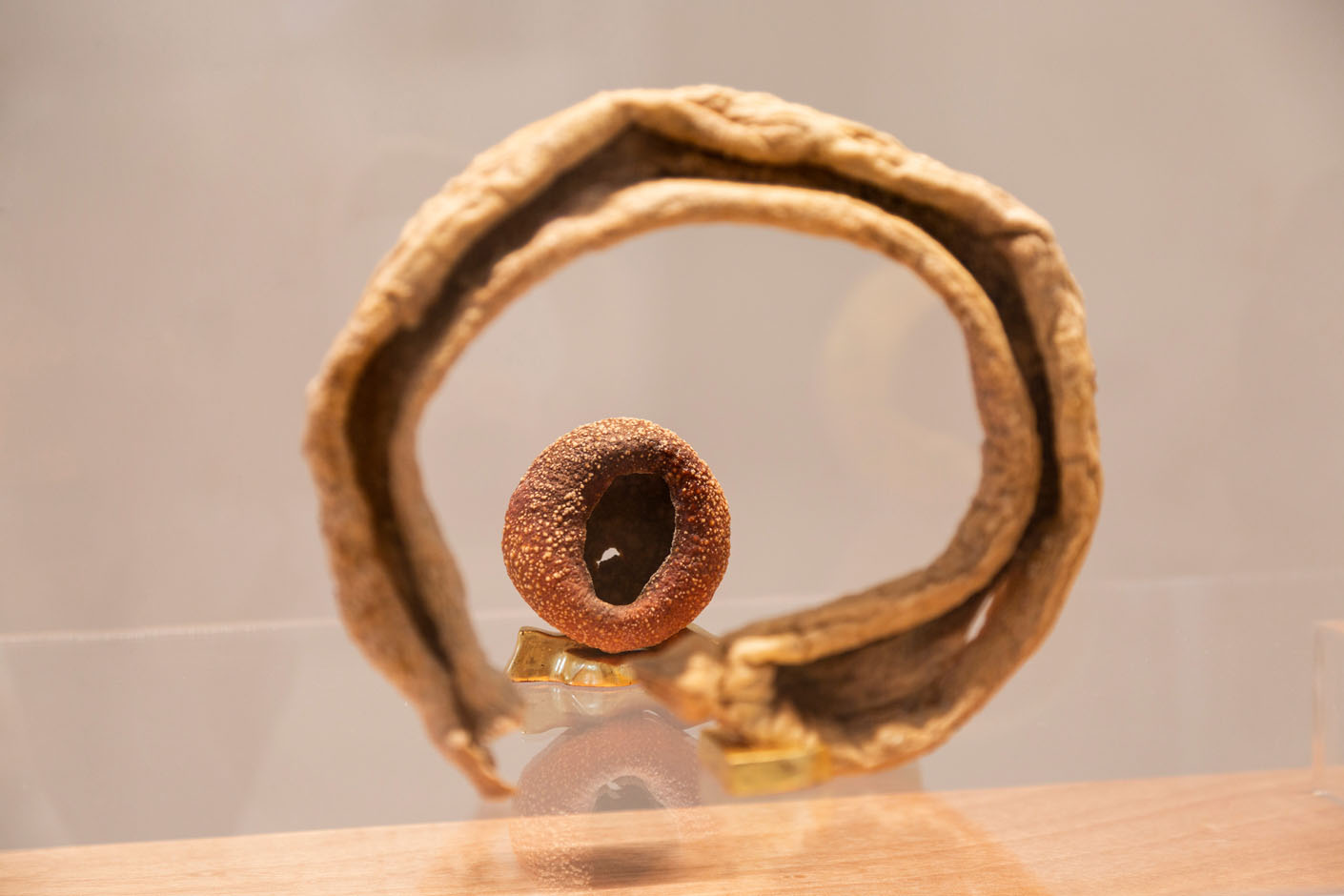 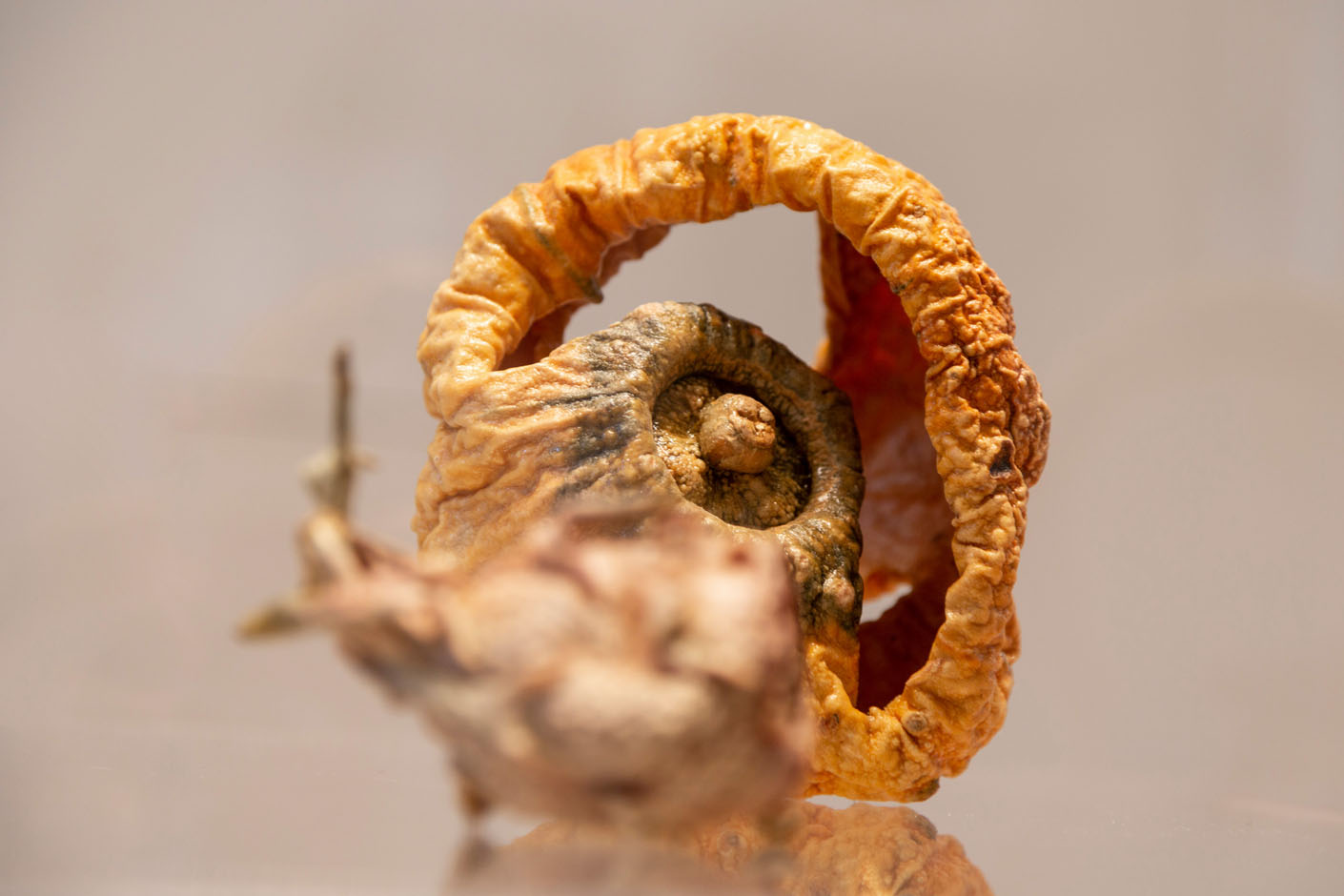 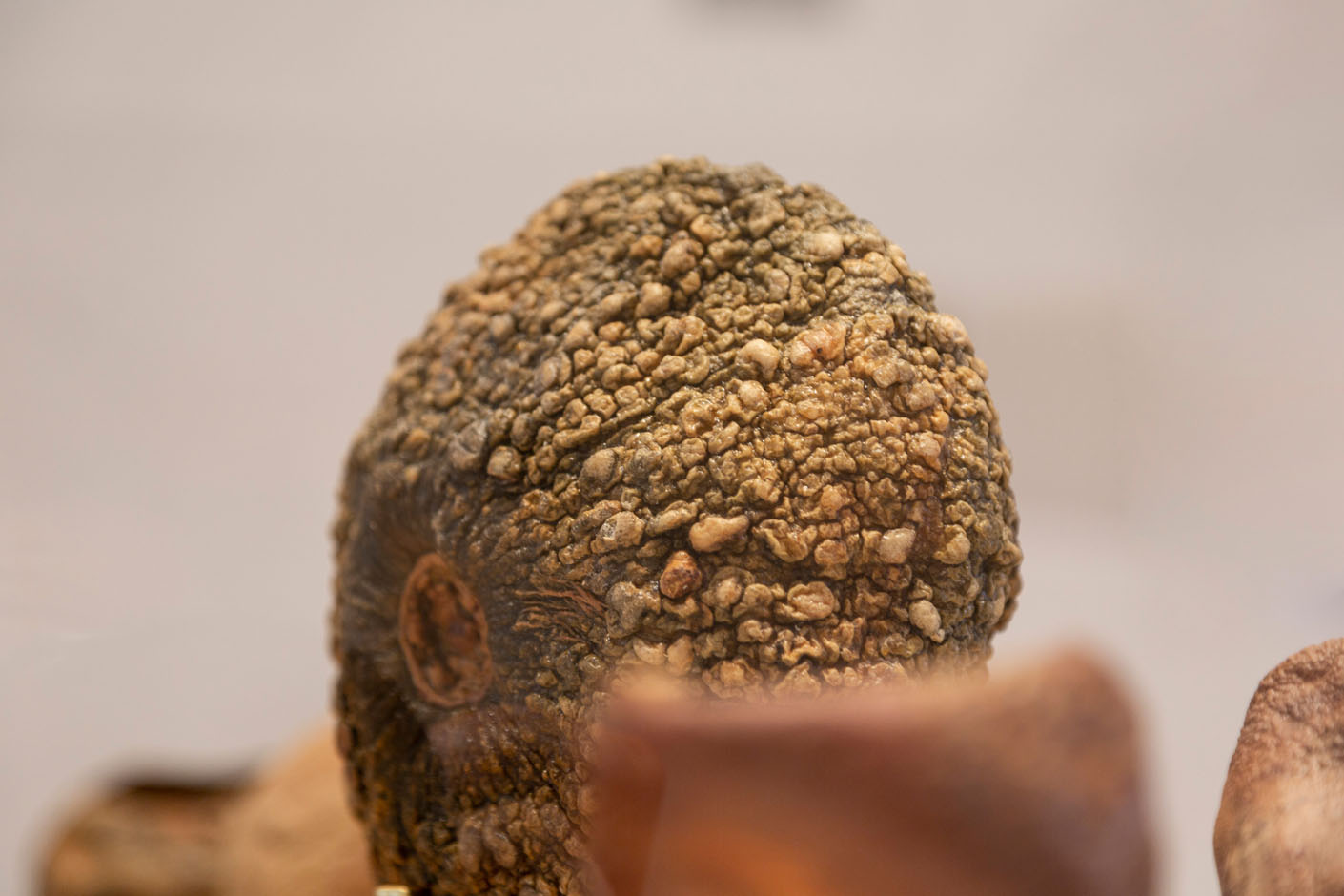 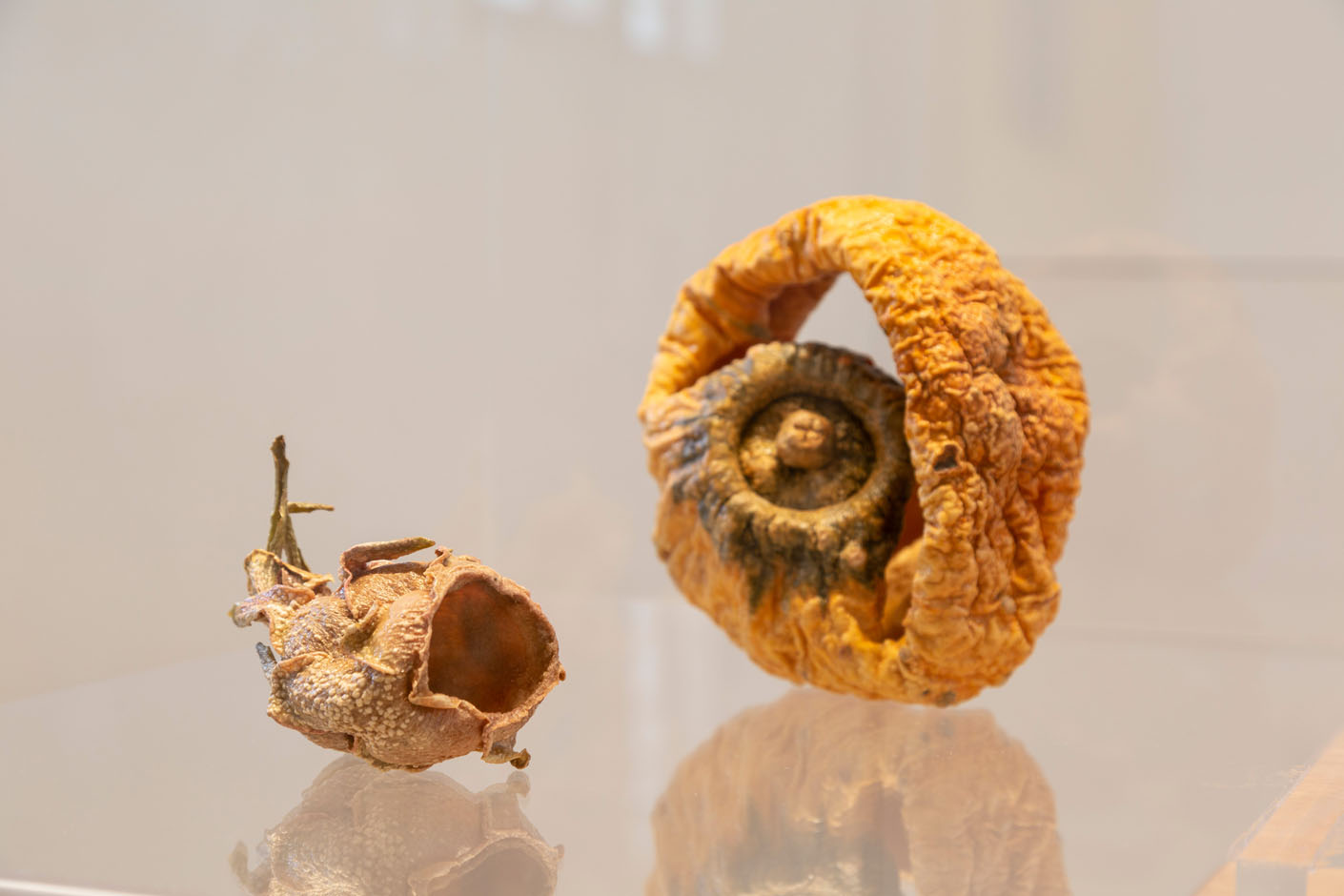 Notes For Dried And Living Bodies

2021, Dried and stabilised fruits and vegetables, wooden base and 24 carat gold leaf, perspex, okumè. Courtesy the artist and Pinksummer, Genova

“There’s nothing natural about nature. When nature looks natural to you, everything will be finished and something else will start.” These words were spoken by the centaur Chiron in the film Medea by Pier Paolo Pasolini. The artworks by Trevisani and Ronchi exhibited here question the idea of a separation between nature and culture; they seem to say that when nature mirrors your idea of nature, something will go wrong. In Notes For Dried And Living Bodies, the artist retrieves floral patterns designed by William Morris and Fortunato Depero and prints them onto dried palm leaves, which are then framed as specimens as in natural history museums. Trevisani’s operation investigates the thin line between nature and artifice: with a twist, the artist casts the imaginary phytomorph onto a real plant in order to demonstrate that, ultimately, we are part of the very nature we are trying to understand.

For Italian Twist, Trevisani exhibits also his new installation Ciotole di tempo (Bowls of time), in this work Trevisani creates a reliquary dediacated to food. The peel of vegetables and fruits underwent a process of dehydration in order to become an eternal relic. “The structure of reality is not what our grammar assumes […] We do not have a suitable tense to say that an event ‘has been’ with respect to me, but ‘is’ with respect to you.” These words by renowned physicist Carlo Rovelli in The Order of Time attempt to explain that the structure of time in which we live is far from ordered and consequential. Ciotole di tempo by Trevisani seems to translate into visual terms this thought that unhinges our usual temporal logic. These works are still lifes in the form of reliquary and aviary. Trevisani, recovering the sanctity of food, creates a sculpture from it and transforms common leftovers into eternal sculptural elements, fixing what is perishable into an everlasting present.

Notes For Dried And Living Bodies

2021, Dried and stabilised fruits and vegetables, wooden base and 24 carat gold leaf, perspex, okumè. Courtesy the artist and Pinksummer, Genova